skip to main | skip to sidebar

...don't worry, not for good. i have a conference in orlando that i leave for tomorrow. i am so excited about it. i won't be back until next friday. i do plan on taking mike's laptop with me, so i may be able to sign on while i'm there, but i am not sure.

"WATCH OUT MOUTH, HERE IT COMES!!" 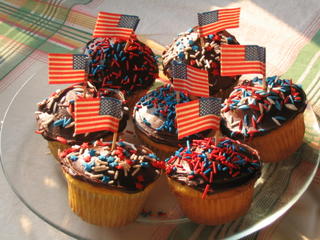 this is what mikey said when he was taking a bite out of one of the cupcakes you see here. since we are not going to be with the kiddos for fourth of july (more on that later in the week) i decided to make some 4th of july cupcakes. of course they were delish.

but really stole the hearts of mikey, bella, and myself (not mike b/c he HATES pumpkin), was this pumpkin fluff pie you see here. 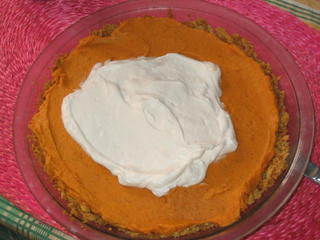 mix graham cracker crumbs, brown sugar, and melted butter in a pie dish. once mixed cover bottom and sides with mixture to make the crust. i then throw mine in a 350 degree oven for a few minutes to set it. this optional of course.

dump pumpkin, pudding mix, and pumpkin pie spice in a bowl and beat with a hand held mixer until completely mixed. then add whipped cream.

*note: i got the recipe for the pumpkin fluff when i was cruising around the weight watchers message boards before i had bella. this is one of the best recipes if you like pumpkin. the recipe called for it to be served by itself, but i thought, hey, whay not throw it in a pie crust and call it delish?

pictures of the kiddos eating their cupcakes:

THE DRESS HAS ARRIVED!!!

well, the vintage school dress that i have mentioned before has arrived from freckle wonder. if you haven't checked out her site, i beg ya to! she also sent a cute lil personal message which i thought was a wonderful thing for her to do for a customer!

it is even more spectacular in person. i am completely smitten. even though it is a size 4t and bella is only in a 2t, she will be sporting it this fall with black tights and lil shiny black mary janes.

well, today on our way to walmart, we stopped at the property to see what kind of progress they are making on clearing the land. they are making pretty damn good progress. its funny, when i see it almost cleared, my stomach does flip flops. i look at the land and picture my soon to be pretty white house on it and i am just elated!

i have to share though what you see when you first drive in the subdivision (now keep in mind, this is a regular neighborhood just like any other neighborhood except for the fact that it is placed in the country).

thats right folks...steer (i believe that is the correct name)!

and there is more than one. should i worry about the kiddos riding their bikes???

notice the "bad boy" on one of the pieces of equipment. would it help if i told ya that the guy who is clearning the land has been in jail?? i'm not kidding.

this is the view i will see when i sit on the front porch.

one of the pine trees that have been pulled.

pretty view of the sun through the trees. 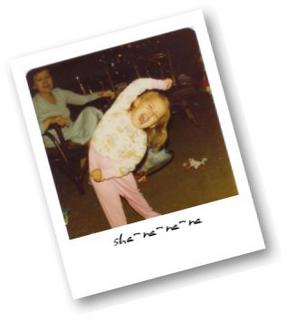 while i was surfing over at meggie cat i saw she has posted a link to polaroid-o-nizer which allows you to upload an image and it will turn it into a polaroid.

i uploaded a picture of me doing a move that bowzer used to do on a tv show called "sha-na-na-na". i don't know if anyone reading will remember this show, b/c i sure as hell don't, but that's what mom said i was doing :)
told by elizabeth on Saturday, June 25, 2005 No comments:

I HEART MY CAMERA!!!

i really love having my camera in front of my face (i just wish that i would take the time to read the instruction book so i know what each feature is for and how it would help perfect my picture....too lazy for that though ;)

i love getting a really good picture of my children. a picture that captures their mood and the moment in time. i love trying to be creative with the pictures i am taking. i love close ups more than i love farther away shots. i love taking self portraits of myself by stretching out my arm and taking the picture myself. i love taking pictures of people in their element (i.e. like my hubby only wearing a white tshirt and his undies around the house on a saturday morning).

i just love taking pictures and kick myself for not carrying the camera around with me on a regular basis.

today after dinner, i decide to take some pictures of the kiddos eating a push up and then bella afterwards taking a bath.

enjoy one of my loves!

thanks to the inspiration i received from robin, i took some lil baskets that i have had sitting around for about, oh i don't know, 4 years and made lil pin cushions outta em.

i cut the handle off the basket so it wouldn't get in the way. i took some stuffing and filled some fabric i had laying around and mushed it around until it had a nice shape. i then weaved ribbon around the top of the basket and then hotglued the stuffing/fabric inside the basket.

i then make some pins with my shrinky dink set and these work so much better than those printable shrinky dink sheets. my.gosh.are.these.addictive.to.make.

i sent these out in swaps and they have arrived to their destinations by now so its safe to post.

tonight, after dinner, i began to hand out icecream sandwiches while we were all sitting at the table. while i was unwrapping the first sandwich, mikey asked me if it was his. i told him no it was for bella, ladies first. mikey proceeded to give me the "aww man" face and i told him that ladies were first. i also went on to say that that we needed to teach his generation chilvary b/c it is DEAD (lets face it ladies, i think its even beyond DEAD!!!).

so i gave bella her sandwich, unwrapped mikey's, gave it to him, and then asked mike if he wanted one. he said yes and i handed him one.

happy father's day to the best damn daddy i know. every day that i look at michael, i see how lucky i am to have mothered children with a man who is so selfless. a man that has never one minded changing a poopy diaper or giving a lil one a bath. a man who loves giving out hugs and kisses as much as he loves receiving them. a man who works very hard to support his family. a man who loves to spoil his children with whatever they want.

i love you michael and the kiddos love you very, very much!!!


this morning for breakfast, we woke michael up with a very loud "happy father's day". i cooked him french toast and bacon for breakfast which he thought was yummy.

for his present, me and the kiddos chipped in and bought him a beautiful (and very much needed) cigar humidor cabinet for all his cigars. currently he has made humidors out of coolers and not only is he running out of room, but they look ridiculous in the bedroom (not to mention, that is not how he is going to keep them in the new house). so in a few days it should arrive and i just have my fingers crossed that its big enough (it holds up to 500)!

i hope you all had a happy father's day with your hubbies or your fathers!!

sitting down for our father's day breakfast.

mike opening up his present.

i was completely inspired by this post by stephanie.

i used a vintage "green hen" fabric and i glued a sewn lil black square on the front (this was due to thinking of it after the purse was finished) and sewed vintage green buttons on the square.

its hard to tell in the picture, but there is two pleats at the top on each side.

this purse took me forever due to never making one like this before. i tried a few different things and did pull some hair out, but i do like the results.

so what do ya think?

i received this link in an email at work today. you enter in your date of birth and it tells you some information (i.e. how many hours you lived, etc.) and at the bottom you can look at a picture of what the moon looked like the day you were born!

i thought that was pretty cool.

LOOK AT THE GOODIES I RECD. FROM JENN!!

jenn sent me the most awesome pkg. today for some of the vintage patterns i am going to send her.

*the most awesome vintage cards. i think the girl has given me a new hobby ;)
*a cute lil brass ball that i am going to turn into a necklace
*a vintage napkin/hankerchief
*a hello kitty candy
*fabric fortune cookie (too cute)
*vintage buttons


take a look for yourself!

thanks jenn! i hope we can swap again in the future :)

elizabeth
i'm a girl who: loves my darling hubby and bug*a*boos to pieces, adores and collects all things vintage, is having an affair with my kitchen aid mixer (hello luvha), is addicted to getting my hands covered in paint and glue, plays in my garden, enjoys escaping in a good book, watches endless hours of murder she wrote, eats candy by the handfuls, pretends that i'm a photographer, makes lists and then never looks at them again.

what did i say?

i've been ramblin' on for how long?